While the main focus of TortoiseSVN lies on usability, sometimes I like to add something which doesn't really add a value but just looks nice.

Last week I wanted to implement just that: something that looks nice but doesn't disturb the user. The Windows explorer shows a slightly visible image on the bottom right depending on what files are in the folder it currently shows. The image is barely visible like a watermark. I wanted to show such a watermark image in our main dialogs file list.

The obvious step to get this done would be the SetBkImage method of the CListCtrl class, since that's the control we use to show the file list in our dialogs. So I called that method like this:

But of course, that didn't work at all. No background image was shown. Stepping through the code of SetBkImage shows that it's simply a wrapper around the LVM_SETBKIMAGE message. Reading the MSDN docs about that message reviled something that was missing completely from the documentation of SetBkImage: the parameter hbm of the LVBKIMAGE structure is "not currently used". Just great. I then tried to use another option:

Next I tried to draw the image directly in the NM_CUSTOMDRAW handler of the list control. That worked really well, until I scrolled the list of files a little bit faster. That produced some ugly "leftovers" from the watermark image. Turns out the list control doesn't always redraw its background completely when scrolled, which is actually a good thing for performance, but of course bad for me and what I want to do.
On a sidenote: the CDRF_NOTIFYPOSTERASE isn't used in the list control.

But there must be a way, because Microsoft does it with the explorer, assuming of course they don't use some undocumented feature they like to keep to themselves.
Sometimes it is useful to read the header files from the SDK. In the file commctrl.h I found the following defines for use in the LVBKIMAGE:

But of these three defines, only the first one is documented. Well, not exactly. Searching MSDN for LVBKIF_TYPE_WATERMARK revealed this page. And here those defines are documented. Heureka! Or so I thought.

Nope, didn't work either. Maybe the bitmap I used didn't have a real alpha channel? Removing the LVBKIF_FLAG_ALPHABLEND flag didn't help either. Out of pure desperation I tried this:

And this worked! Unbelievable. Even though the documentation tells that the hbm member of the LVBKIMAGE structure is "not currently used", it obviously is used (and must be used) if the LVBKIF_TYPE_WATERMARK flag is set. The image was shown in the bottom right corner and stayed there without any UI glitches even when scrolling the file list. But (there's always a "but") the image was not shown with its alpha channel. Where it should have been transparent it was drawn black. But that's what the LVBKIF_FLAG_ALPHABLEND flag is for:

Or at least that's what I thought. Adding the LVBKIF_FLAG_ALPHABLEND flag made the bitmap disappear. I tried different bitmaps, used different image editors to create a bitmap with alpha channel, but nothing worked. I even extracted the bitmaps from shell.dll which the explorer uses for this. Even those did not work!

But giving up so close to reaching the goal? Not me :)
The easy solution would be to simply use a bitmap with a white background. That looks good on most systems where the user hasn't changed the default system colors. But some users actually change them, and some even use red or other colored backgrounds. On those systems, the background image would look really ugly. So that's not a real solution.

What I finally came up with was to draw the image alpha blended into an empty bitmap where the background was set to the system background the user has set.

And that's how I got this to work. One problem remained: the watermark image was painted over when an item got selected, and the first column was not transparent and was also painting over the watermark.

As it turned out, this was due to the fact that I set the LVS_EX_FULLROWSELECT style for the control. Removing that style finally made the watermark image behave the exact same way it does in the explorer.

And now (drumroll please): the screenshots of the add and commit dialog: 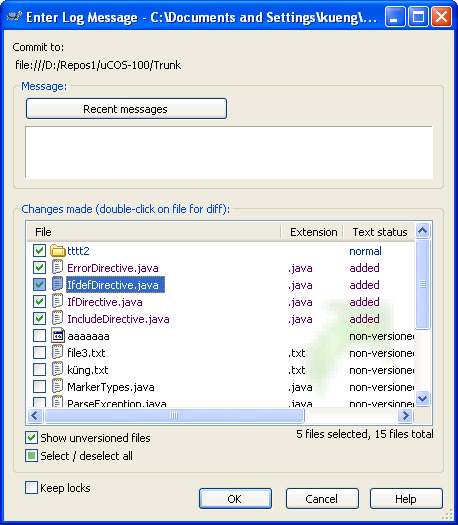 And in case someone knows how to use the LVBKIF_FLAG_ALPHABLEND flag, please let me know!