Subversion repositories served with Apache have the nice built-in feature: the repositories can be browsed with any webbrowser at no additional cost.

For Subversion repositories served via svnserve, this is not possible because browsers don't understand that protocol. 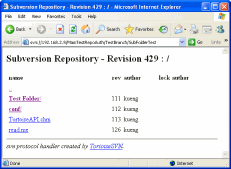 Note: the protocol handler only works in Internet Explorer. Chrome, Firefox etc. users either have to switch back to Internet Explorer for SVN browsing or hope someone will create an svn:// handler for them.