Details are described below.

Older clients and servers interoperate transparently with 1.5 servers and clients. Of course, some of the new 1.5 features may not be available unless both client and server are the latest version. See the table below about which features require which versions:

All other features are independent of the server version and can be used without any restrictions.

Have a look at the Subversion FAQ about the working copy format change.

Merge Tracking in Subversion 1.5.0 is roughly equivalent in functionality to svnmerge.py, recording and using merge history to avoid common cases of the repeated merge problem, and allowing for cherry-picking of changes. It exposes merge history via properties, and allows for repository dump/load (including the ability to re-create the merge history index).

When working on a branch, Subversion now tracks each revision which gets merged. This makes it easier to merge changes e.g., from trunk because it is possible to always merge the whole revision range without the risk of merging the same revision twice. Subversion will automatically omit the already merged revisions when doing the merge.

To block a revision from being merged, TortoiseSVN provides a button in the merge dialog named "record only". This will tell Subversion that the revision has already been merged, without doing the merge itself.

Many users have very large trees of which they only want to checkout certain parts. In case of folders with many subfolders, some of the subfolders might not be needed.

TortoiseSVN provides the user with a combo box to choose the depth of a checkout:

The depth of the checkout is remembered, so that a later update will respect that depth and not fetch everything again.

SASL also provides data encryption in some of these methods, so you can secure your data while it is being transmitted over the internet. Securing your connection using SASL should be easier than setting up an SSH infrastructure.

Sometimes you are working on several different problems at once in your working copy, and it becomes difficult to track which files are involved in which change. TortoiseSVN now allows you to group files together into logical changelists. These appear in the Commit dialog and the Check for Modifications dialog. As well as giving a visual indication, you can also select groups for commit. 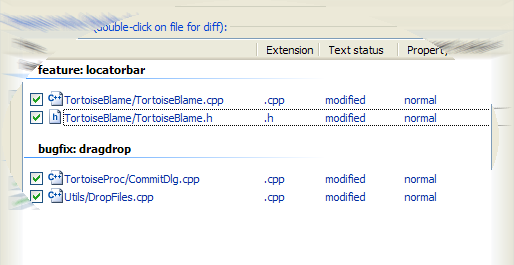 TortoiseSVN also provides a special changelist named ignore-on-commit. Files which belong to that changelist are not selected in the commit dialog. This helps if you have a file which you must keep versioned but which you don't want its modifications to get committed.

Fetching the log information from the repository can take a long time, especially for repositories with thousands of revisions or if the repository is not on a fast connection.

TortoiseSVN 1.5 can cache the log entries on the local drive. Only the entries which are not yet in the local cache are fetched from the repository.

The log cache improves the performance not only of the log dialog but also of the revision graph.

The repository browser has been completely rewritten and now more resembles the Windows explorer. It has two panes, with a tree view on the left and the file/folder list on the right. 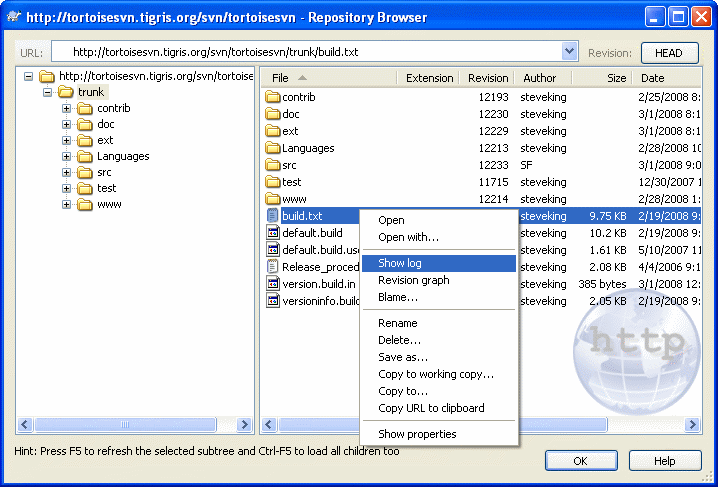 It is also possible to drag files/folders from the repository browser directly to the explorer as a fast way to save/export those files/folders.

The revision graph has changed dramatically since the previous release. Apart from using the log cache if available, it is also much faster when analyzing the log data.

A small window on the top right of the graph shows an overview of the whole graph.

The new revision graph has much more options to tweak the output. For example, the direction of the graph, how the nodes are arranged in the graph or which nodes/paths/urls should be filtered out completely.

TortoiseSVN allows the execution of client side scripts before and after certain operations. The available hooks are:

Line endings
inconsistent line endings are handled properly, including MAC line endings
Undo
Changes made during conflict resolving can be reverted one by one
Editing
The target file can be edited directly in TortoiseMerge without the need to use a text editor

The SubWCRev tool now has a COM interface for easy access from scripting languages. This makes it possible to embed the revision information in e.g., Microsoft Word documents.

If you're using other Tortoise clients like TortoiseCVS you might know about the problem with the limited overlay slots in Windows. With both TortoiseSVN and TortoiseCVS installed, some of the overlays won't show up anymore. This is due to the fact that Windows only has about 12 slots available for overlays and with both applications installed, that limit is exhausted.

TortoiseSVN 1.5.x and the TortoiseCVS unstable releases already use this new overlay handler.

Due to this new overlay handler which shares the overlays, TortoiseSVN gained two new overlays: for unversioned and ignored files there is now an overlay too.