TortoiseSVN 1.8 is a superset of all previous TortoiseSVN releases, and is considered the current stable and "best" release. Anything in earlier versions is also in 1.8, but 1.8 contains features and bugfixes not present in any earlier release.

This page describes only major changes. For a complete list of changes, you can check our commit logs and the list of issues for 1.8

Instead of just coloring the changes by age/revision, TortoiseBlame can now color the lines by author so it's easier to spot who changed which lines. 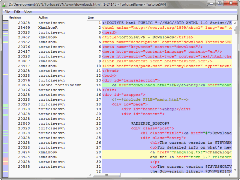 Commit only parts of a file

When working on a task, it often happens that you find an issue with the surrounding code. Fixing that issue leads then to multiple tasks done in the same file, and therefore also to have multiple fixes/tasks done in one single commit.

To commit only the parts of the file that relate to one specific issue:

After the commit is done, the original file is restored, containing all the changes you didn't commit yet.

TortoiseMerge, the visual diff/merge tool that comes with TortoiseSVN has also a lot of improvements.

Ribbon UI
TortoiseMerge uses now a Ribbon instead of a plain toolbar for its commands.
Searching
new shortcuts to search Ctrl+F3, better indication of search matches, only search the active view.
go to line
a new command to go to a specific line number.
inline diffs
inline diffs can be toggled on/off with a single button instead of going through the settings dialog
handling of UTF-32 files
TortoiseMerge can now handle files in UTF-32 encoding as well, and recognizes more EOL formats.

At the bottom of the Repository Browser dialog a summary is shown, indicating the number of files and folders and the currently shown folder.

There are also two new buttons to go back and forward, like in web browsers.

When there are third party libraries stored in the working copy directly, i.e., not via the svn:externals property, then updating those is not quite easy.

In version 1.8 TortoiseSVN offers an easier way to do this: just right-drag the folder with the new version of the library to the version stored in your working copy, then select SVN vendor branch here from the context menu.

TortoiseSVN then scans both directories, copies all new files, removes files that are not present anymore in the new version.

After TortoiseSVN updated the folder, all you have to do is commit the new version.

The dialog that shows the progress of various operations now has a better indication of sections/grouping, for example when updating a working copy that has multiple externals set.

Each section/group is indicated by the first line shown in bold.

And as for updating externals: only those externals that pull down modifications are shown in the dialog. If an external hasn't changed then the dialog does not show any information for it. This reduces the no-information lines a lot, especially if you have a lot of externals set.

SubWCRev also got a lot of improvements, the major ones are:

If you're using custom properties, you can now configure TortoiseSVN to provide better dialogs to edit and modify them.

The properties tsvn:userfileproperties and tsvn:userdirproperties got extended so you can specify what kind of property you have.

Have a look at our docs on how this works.

In earlier versions you could only configure client-side hook scripts via the settings dialog. This worked ok if you only had a few workstations/users to configure. But if you wanted a big team of committers to all run the hook scripts you needed, this required a lot of work to set up.

In TortoiseSVN 1.8 you can now configure the hook scripts to run via project properties.

To avoid running potentially insecure scripts without the user knowing it, TortoiseSVN will ask to run those scripts first.

Have a look at our docs on how this works.

Migrating to 1.8 working copies must be considered a one-way operation. If you need to use multiple clients on the same working copy then be sure that you can update all the clients before upgrading the working copy.

Older clients and servers interoperate transparently with 1.8 servers and clients. That is to say, you can use a 1.8 client with an older server, and you can use a 1.8 server with older clients. However, some of the new 1.8 features may not be available unless both client and server are the latest version. There are also cases where a new feature will work but will run less efficiently if the client is new and the server old.

Two new context menus and commands have been added to the log dialog when multiple files are selected in the bottom “files changed” listbox.

The details of how these commands work, which include special support for loading working copy files into Visual Studio can be found in the subversion help file under the topic 'Invoking the Revision Log Dialog'.