TortoiseSVN 1.9 is a superset of all previous TortoiseSVN releases, and is considered the current stable and "best" release. Anything in earlier versions is also in 1.9, but 1.9 contains features and bugfixes not present in any earlier release.

This page describes only major changes. For a complete list of changes, you can check our commit logs and the list of issues for 1.9

If you're still need to use Windows XP, you have to keep using TortoiseSVN 1.8.

The projects can be monitored via a working copy path or directly via their repository URLs.

The project monitor scans each project in a configurable interval, and every time new commits are detected a notification popup is shown. Also the icon that is added to the system tray changes to indicate that there are new commits. 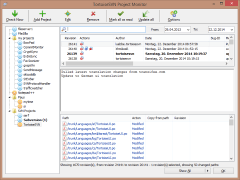 All settings that are configurable in the settings dialog can be synchronized to a specific file, or manually exported/imported. This allows to set up new workstations much easier and quicker.

If the specified path for the sync feature is on a cloud drive like Onedrive/GDrive/Dropbx/..., then changes made to settings are automatically synchronized to all other workstations that use the same cloud drive and have set their sync paths accordingly.

More information about which settings and which data is synchronized can be found in the documentation.

SubWCRev, the command line tool to gather information about a working copy, has now an option to ignore files or whole paths. The ignored paths/patterns need to be written to a text file named .subwcrevignore in the working copy.

A more detailed description of this new feature can be found in the documentation.

The image diff tool TortoiseIDiff can now help resolving conflicts of images as well. In a conflict situation, it will show all three images that take part in a conflict, and lets you chose which one to keep/use. 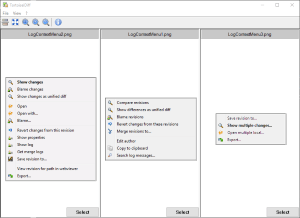 Bookmarks in the repository browser

The repository browser can now show a list of bookmarked repository URLs. This allows to faster browse often used repositories, without having to first enter the URL manually or find the corresponding working copy. 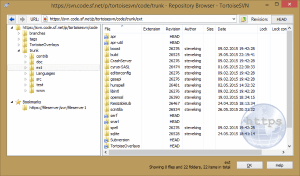 Files and folders that are dragged from one working copy to another with the right mouse button down can be automatically added as externals to the dropped working copy.

This is useful in case a hook script has to ensure a certain format of the commit message, or scan all files that are to be committed first.

Another hook is available that if set, shows a button in the commit dialog which when clicked runs that hook script.